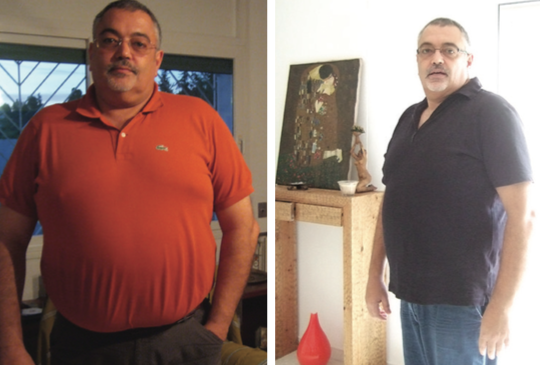 This is a rather singular story of a gentleman who is over fifty, divorced, father of a child of about twenty with whom he lives, who suffers from excessive abdominal obesity when he comes to me.

He is very tall, and the 50 kilos he has in excess, are almost all located in his abdomen, which handicaps him enormously.

He tells me: He is a the owner of a family business renowned in the design of decorative objects, which he took over in recent years. A very well educated gentleman and a lover of beautiful things and fine gourmet but very unhappy in his skin.

And what worries him most is that it affects how he manages his business and he is aware of it. He is distraught when it comes to asking his employees for anything, and he is even scared of it.

As a result, he prepares his own coffee and asks for nothing and that things seemed to have deteriorated at a relational level with his staff. He feels he can not impose respect, since he abstains from all the means to communicate with his teams. He has imprisoned himself in a tower of Chrystal, which he no longer knows how to get out of.

It’s an absolute tragedy for him, but he just cannot do it. He then decides to become a Master in NLP (Neuro Linguistic Programming), in order to be able to find an ease of expression at work and leadership tools incumbent on his position.

But he actually by-passes the problem and unconsciously he knows it. He becomes a Master in NLP, since he is brilliant in everything, but does not arrive at a solution to his problem.

When he comes to see me, he has already made his own analysis of the situation and is totally convinced that he must lose his weight, since the NLP courses have not succeeded in improving the situation, and the family business may collapse if he cannot overcome his problem.

He knows perfectly well that he can regain his mastery and self-esteem only by losing weight but he does not know how to lose weight.

I explain the program to him, and I discover in him enormous qualities and a monumental kindness.

He expresses himself in French worthy of the greatest speakers, is extremely cultivated, pleasant, highly intelligent. The field of business is a field acquired over a long time, nobody has anything to teach him about the functioning of his company that he has known from a young age, whether on a technical or commercial level, he has mastered perfectly all it’s workings. He also has a good command of management tools and leadership, respects and appreciates his employees who seem to be model employees, but just cannot apply them because he has lost all the esteem he had of himself, and according to him, cannot pick up the pieces.

It does not work well in this defective body that is out of sync with the image he has of himself and cannot accept his obesity,which saps his confidence to portray authority and leadership.

For me, this story is a very special case, since it has in it all the assets, except one: the right food program to be able to lose weight

At home, it’s the only thing missing. So I decide to focus the sessions with him only on the theoretical and practical part of the cooking, while always making sure to see if the feelings of self-disparagement decreases, and if his mental scheme is changing when speaking with his employees. I suggest that he pushes through the barriers and explain to them on a person by person basis what he is doing, to take each of his employees aside and to tell them in confidence that he is following this program, and that it is a real discovery for him. To ask them to be witness, to make them taste what he has prepared. To find a way to break the ice, while remaining in a human dimension, which is so important to him.

As he loves to cook, he takes a real pleasure in discovering the light cooking of the program. He explores it from top to bottom and revisits it with his imagination and his tastes. He is amazed to see that he can indulge himself freely, as he is not only a gourmet but a good eater.

He loses in a few months, his 50 kilos, retouches his wardrobe, and a few months later to celebrate inaugurates his achievements in the greatest splendour , with a magnificent showroom filled with a new collection of objects of incredible refinement, surrounded by an impressed, amazed, grateful and smiling staff.

I was kindly invited to the grand reopening and on the menu, on this day that I will always remember, are dozens of small trays filled with mini Smart and Light snacks, prepared with love and imagination by the big boss himself, who has now regained the control of his life and his smile .

This story reminds me that whatever the flaw, just to be able to put your finger on it, to know what it is, is the beginning of your journey to a better and more happy life and that with a little determination, you will not fail.